It is the point of arrival of the group, where you will be greeted by the team of AlRamla to accompany you in transferring to the hotel and helping  with the check-in. You can have lunch and than relax a bit before starting our day.

We will do a city tour to see the most interesting places and enjoy its people. In some places we will walk through its streets, this is one of the best experiences in Spain, feeling that you are able to coexist peacefully with people. A small dinner is programmed before going to the hotel. 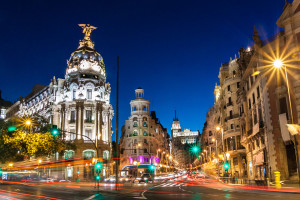 The next day we will do a visit to the football stadium of Real Madrid, where football fans can enjoy the walk through its facilities, visit the museum and buy souvenirs they like. At the end we go to have lunch at a typical place to recharge energy to later head to Toledo.

The city of Toledo was the capital of Spain for centuries and even today we can see how, Muslims, Jews and Christians were able to coexist in harmony for many years. Walking through its streets is like a trip back in the time. We  will have a small dinner, and than we go back to the hotel.

The two most representative cities of Arab culture in Spain.

We will travel from Madrid to Cordoba in high-speed train, a comfortable trip of just under two hours, arriving before lunch, we go to the hotel to do the check- in to than visit the city center where for many centuries was developed one of the greatest cultures known in Europe, the Umayyad dynasty . We will visit the Mosque, one of the magnificent monuments of that time.

The next day we will go to Granada to spend all the day in this city, stroll through the Albaicín and the Alhambra, one of the places most admired by tourists from around the world that shows the great economic, social and cultural development during the Arab Moorish age in Spain.

We will have time to stroll the streets, enjoy the local food and buy souvenirs before returning to Cordoba to rest.

The second largest city in Spain and the most cosmopolitan of the country. We get it from Cordoba by the TGV, high speed train (always in business class).

After arriving and checking in at the hotel we will do the city tour in a comfortable bus to see the most emblematic areas, since medieval Barcelona, ​​through the Modernist buildings until the city of the future. We’ll go to have dinner and than return to the hotel, those who want to go for a walk through the famous Ramblas can do it, to see the atmosphere of a city that never sleeps.

The following day we will have the morning to walk and relax before returning to Madrid, where we will stay the night, to take the next day the flight back to our homes.